This is my review of the Quicksilver 425 Commander Sportsboat which I owned for around two to three years until 2015. It had a 50HP Mariner two stroke engine (all Quicksilvers are sold with either a Mariner or Mercury engine). In summary, it was a great boat on which I had a lot of fun, so I am more than happy to recommend the Quicksilver 425. I have to say, this boat made me smile every time I looked at her. At first I kept her in storage in Kingsbridge and she would be put in the water and taken out for me every time I used her. Call me tight, but the £80 before fuel to use my boat on top of the £60 a month storage fees just became a bit of a bind, so I bought her home and put her on my drive.

This was a smart move as I got to see her every day, and, like I said, she looked good.

Every time I took her out or had her on the beach at Hope Cove, people would come and look and ask me about her. The Quicksilver 425 just looks different – and a good different too! The 50HP Mariner And Handling Of The Quicksilver 425 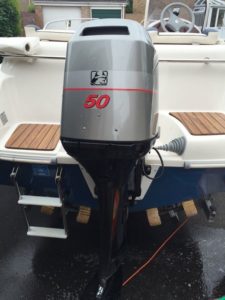 Excellent. Very fast, easily able to tow a ringo (I had the O’Brien screamer, aptly named because that is exactly what happened when you turned a corner and she then started to bounce around like no one’s business). I am sure she could have towed a skiier but I didn’t try.

On smooth water she was simply a pleasure to handle, flying nicely across the top on the plain. 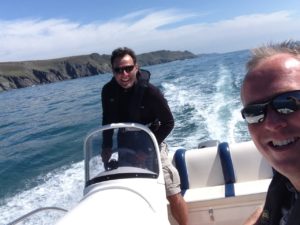 However, in lumpy water she wasn’t quite so much fun, tending to slam into the waves which became uncomfortable after a while, espcially for anyone sitting right in the bow. They had to hold on and often had a sore bum by the end of it. You can see the boards in the picture above. The cushions sat on these. Generally, on longer cruises the boards were stored away with the spare sunbathing cushions which wasn’t a problem as there was cavernous storage available (see below).

Storage On The Quicksilver 425 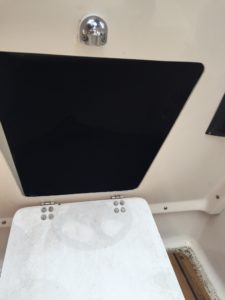 The storage on this boat was insane. Seriously, loads of it. There is a huge storage area for the two fuel tanks beneath the rear seating. In here you can fit the spare cushions and wooden boards, plus I ha 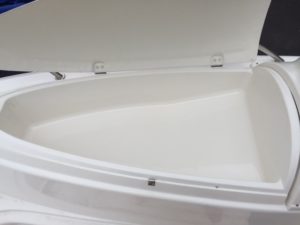 d all sorts of other gear in here, plus the anchor.

Beneath the steering wheel is another vast storage area where I kept life jackets, engine oil and all sorts. It was the most watertight compartment but only accessed through a relatively small hatch, but it was so deep you struggle to get to the end of it.

Finally, there was a small storage area on top of the torpedo in front of the helm position. This leaked a little so it just had odds and ends thrown in here.

If storage is your thing, you will not be disappointed with the Quicksilver 425.

This was perhaps the biggest problem for me and the main reason for selling her. It was not possible to launch her from the beach with just one person, not even two. Three would manage but four was much more comfortable, so it meant you always needed to borrow some hands.

As I like to launch from a beach this was a problem for me. If you are happy launching and recovering on a slipway then this will not be an issue for you.

My overall review of the Quicksilver 425

I loved it. She gave me countless hours of fun, so if you are looking for a fun boat, I would have no problem recommending this one. We use cookies on our website to give you the most relevant experience by remembering your preferences and repeat visits. By clicking “Accept All”, you consent to the use of ALL the cookies. However, you may visit "Cookie Settings" to provide a controlled consent.
Cookie SettingsAccept All
Manage consent

This website uses cookies to improve your experience while you navigate through the website. Out of these, the cookies that are categorized as necessary are stored on your browser as they are essential for the working of basic functionalities of the website. We also use third-party cookies that help us analyze and understand how you use this website. These cookies will be stored in your browser only with your consent. You also have the option to opt-out of these cookies. But opting out of some of these cookies may affect your browsing experience.
Necessary Always Enabled
Necessary cookies are absolutely essential for the website to function properly. These cookies ensure basic functionalities and security features of the website, anonymously.
Functional
Functional cookies help to perform certain functionalities like sharing the content of the website on social media platforms, collect feedbacks, and other third-party features.
Performance
Performance cookies are used to understand and analyze the key performance indexes of the website which helps in delivering a better user experience for the visitors.
Analytics
Analytical cookies are used to understand how visitors interact with the website. These cookies help provide information on metrics the number of visitors, bounce rate, traffic source, etc.
Advertisement
Advertisement cookies are used to provide visitors with relevant ads and marketing campaigns. These cookies track visitors across websites and collect information to provide customized ads.
Others
Other uncategorized cookies are those that are being analyzed and have not been classified into a category as yet.
SAVE & ACCEPT
[class^="wpforms-"]
[class^="wpforms-"]